As you may be aware, in the case where the share capital of the newly established corporation is JPY10,000,000 or more at the beginning of the first and second business years after its establishment, Japanese consumption tax is not exempt for that corporation. 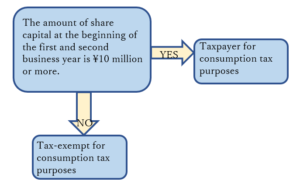 For example, New Co. falls under the category of taxpayer for Japanese consumption tax purposes in the below case.